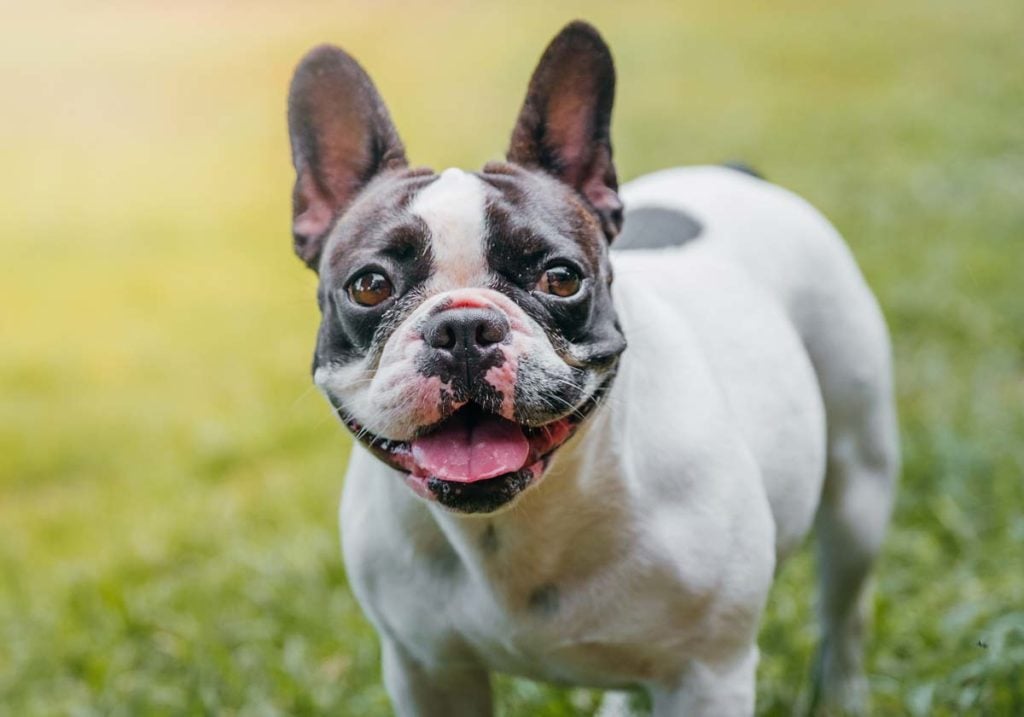 One of the world’s most popular small-breed dogs, French Bulldogs are known for their square heads, big ears, and affectionate nature. Often referred to as “Frenchies,” these dogs are low-maintenance, even- tempered, and not in need of much exercise, making them great family and small-space companions.

The breed that eventually became known as the French Bulldog, ironically, first appeared in England in the mid-1800s. According to the American Kennel Club, these toy-sized pups are thought to originate from English Bulldogs, likely crossbred with terriers and Pugs to bring their size down considerably.

French Bulldogs were particularly popular in Nottingham, England, which was the center of the lacemaking during the 19th century. These miniature pups would warm lacemakers’ laps during the workday and then keep rats and pests out of the factories by night. When lacemaking became increasingly automated during the Industrial Revolution, many English lacemakers relocated to northern French countryside areas, bringing their tiny canine companions with them.

The breed quickly became popular in Paris, where they got their reputation as wonderful city dogs and status symbols. French Bulldogs gained popularity in the United States in the late 1800s. Famous early adopters of the mini bulldog in the U.S. included the Rockefeller and Morgan (i.e., J.P. Morgan) families.

French Bulldogs have a recognizable compact, muscular build. Similar to their English Bulldog cousins, Frenchies walk with a bow-legged gait—sometimes affectionately referred to as a “waddle”—and have large, square heads. One of the French Bulldog’s signature features is their large bat ears.

Frenchies are a brachycephalic and chondrodystrophic breed, meaning that they have flat faces and relatively short legs compared to the rest of their body. Brachycephalic breeds are known for their adorable, smooshed snouts that often lead to snoring and other funny noises, as well as unique respiratory challenges.

The skin of French Bulldogs is loose and soft, forming wrinkles and skin folds around the head and shoulders. Their coat is short, smooth, and comes in a variety of colors. Most common coat colors include shades of brindle, fawn, or tan. A white coat with brindle patches is known as “pied.”

Like other dogs with short, fine coats, Frenchies’ grooming needs are fairly minimal. AKC notes that these low-maintenance pups typically require weekly brushing, particularly during spring and fall shedding seasons. Shedding, however, is minimal, making French Bulldogs an attractive breed for those wanting to limit messes.

French Bulldogs should be bathed about once a month, unless otherwise necessary. This will help keep their wrinkles clean and skin healthy. Those big bat ears should be cleaned regularly, as well. Since many French Bulldogs don’t get a lot of exercise to wear down their nails, pup parents should be sure to trim their Frenchie’s nails regularly.

There is good news for those who want to bring home a pup but don’t have the resources to keep up with an energetic pooch. Frenchies are considered to be fairly low-energy dogs, and most can often be perfectly content to chill on the couch all day. They don’t need a lot of exercise—a couple of 15-minute walks and or some playtime each day should be plenty to give them physical activity and keep them in shape. In fact, Frenchies and their smooshed snouts can’t handle strenuous exercise.

Between their compact size and low activity levels, French Bulldogs also don’t require a lot of space. With this, Frenchies make excellent city or apartment dogs who generally do well in small living quarters.

It’s important to emphasize that French Bulldogs should not be left unattended around water—pools, hot tubs, bathtubs, lakes, ponds, rivers, or oceans. This flat-faced breed is not a strong swimmer and can easily drown due to their front-heavy body structure.

While the average life expectancy of a healthy French Bulldog is between 10 and 14 years, this can be affected by many factors. There are several health issues that the breed is predisposed to. This does not mean that every Frenchie will develop these problems, but pet parents should be aware of potential concerns and be on the lookout.

As a brachycephalic breed, Frenchies are susceptible to Brachycephalic Obstructive Airway Syndrome. Their classic short head and narrow nostril combination creates all those Frenchie funny sounds like snoring, grunting, and snorting, but can also result in total airway collapse. Respiratory issues, including allergies and an elongated soft palate, can obstruct their airways. Frenchies need to work harder to breathe than other dogs and have an easier time breathing out their mouth than their nose.

For everyday quality of life, it’s important to note that French Bulldogs are very susceptible to heat exhaustion. AKC notes that due to their bulky shape, compacted airway, and thin coat, these dogs have a hard time regulating their body temperature. This makes them particularly prone to overheating and getting old in lower temperatures. Parents of French Bulldogs should be aware that these pups have a low tolerance for heat, humidity, exercise, and stress—anything that increases the rate of breath.

The respiratory issues associated with flat-faced dogs like Frenchies make anesthesia slightly more complicated and potentially dangerous. The respiratory muscle relaxation that takes place during sedation can impede breathing that is already labored for these dogs.

According to veterinary experts at ASPCA note that French Bulldogs are also prone to chondrodysplasia, meaning that they can develop back, spine, and disc issues. The most common of these issues is typically hemivertebrae, which is a malformation of the vertebrae that puts pressure on the spinal cord. Intervertebral Disc Disease (IVDD) is also relatively common in dwarf breeds, including French Bulldogs, and is caused by a ruptured or herniated disc.

Experts at Purina note that because of their build, French Bulldogs can also be susceptible to patella luxation, in which the kneecap slips out of place.

French Bulldogs can also be susceptible to developing eye problems, according to Purina. These can include corneal ulcers, dry eye, cherry eye, and conjunctivitis.

Their big bat ears sure are cute, but the narrow ear canal and wide opening of Frenchies’ ears can easily trap germs and debris. This often causes ear infections in French Bulldogs, particularly if ears are not cleaned regularly.

Skin allergies in French Bulldogs are fairly common, according to Purina. Such issues can be the result of environmental allergens, food intolerances, or contact reactions.

Because of their wrinkly skin, Frenchies often develop skin fold dermatitis. Wrinkles should be properly cared for and cleaned—and dried!—regularly so they don’t become inflamed, sore, and potentially infected.

How can ElleVet’s CBD + CBDA help with your Frenchie’s itchy skin?

ElleVet’s CBD + CBDA is proven effective in providing dogs support for itchy skin. We conducted a groundbreaking study in 2020 investigating the efficacy of our CBD + CBDA oil on dogs with Pruritis, itchy skin inflammation common in dogs. Results found that the majority of dogs enrolled in the study, who had not previously responded to other commonly used products, had a significant improvement in skin itchiness after using ElleVet’s CBD + CBDA. Learn more about the study here.

If you are noticing excessive itching, ElleVet’s CBD + CBDA products can address this irritation and discomfort and offer skin health support, which is important for maintaining a good quality of life. Pet parents give their dogs our chews, soft gels, and oils to help ease their furry friend’s discomfort and incessant itching with tremendous success. In addressing these issues, ElleVet’s CBD + CBDA can lead to improved overall well-being. And we all want a happy, healthy pup!

As always, consult your veterinarian about any issues your dog is experiencing. For any questions about ElleVet’s CBD + CBDA products or how CBD can help your canine friend live their best life, give us a call (844-673-7287) or send us an email ([email protected]). We are here to help.

As their physical appearance suggests, Frenchies are goofy little guys. AKC notes that the breed is “generally active and alert, but not unduly boisterous.” Those big bat ears are perfect for being on high alert, and they tend to be curious and interested in whatever is going on around them. French Bulldogs are also not known to bark much, so they can make great watchdogs who will alert you to suspicious activity when you need them to.

A hallmark trait of the French Bulldog breed is their immense affection towards people. They love their family and also warm up to strangers with ease. A patient, well-behaved, family-friendly dog, Frenchies are generally great with children. For those who have other dogs either in the home or in the neighborhood, French Bulldogs are usually a good pet choice. Most get along well with other dogs and animals, although it’s important to keep in mind that every dog is different.

No matter where you live, how big your family is, or how busy your schedule is, Frenchies can go with the flow. As long as they’re with their people, these even-tempered pups are known to be adaptable and can thrive anywhere. They’re not a working breed, so while some dogs may need a job or stimulation or they’ll get bored and potentially destructive, Frenchies are content to chill. It’s hard to think of a more lovable companion!

Frenchies are cute and cuddly, but they also have big personalities. With this, ASPCA points out, they usually need a good amount of training in order to be the lovable companions their owners want. The good news is that French Bulldogs are an intelligent breed, so they’ll be able to pick up on what you expect from them.

These tiny flat-faced pups are known for being natural people pleasers—all they want to do is make you happy! Coupled with their intelligence, Frenchies’ desire to please their humans makes them very trainable. As with any training efforts, it helps to use the right motivation strategies. These dogs typically respond well to food and games, so keep it fun and rewarding! French Bulldogs, if trained properly and with the right affectionate, even disposition, can make excellent therapy dogs in schools, nursing homes, and hospitals.