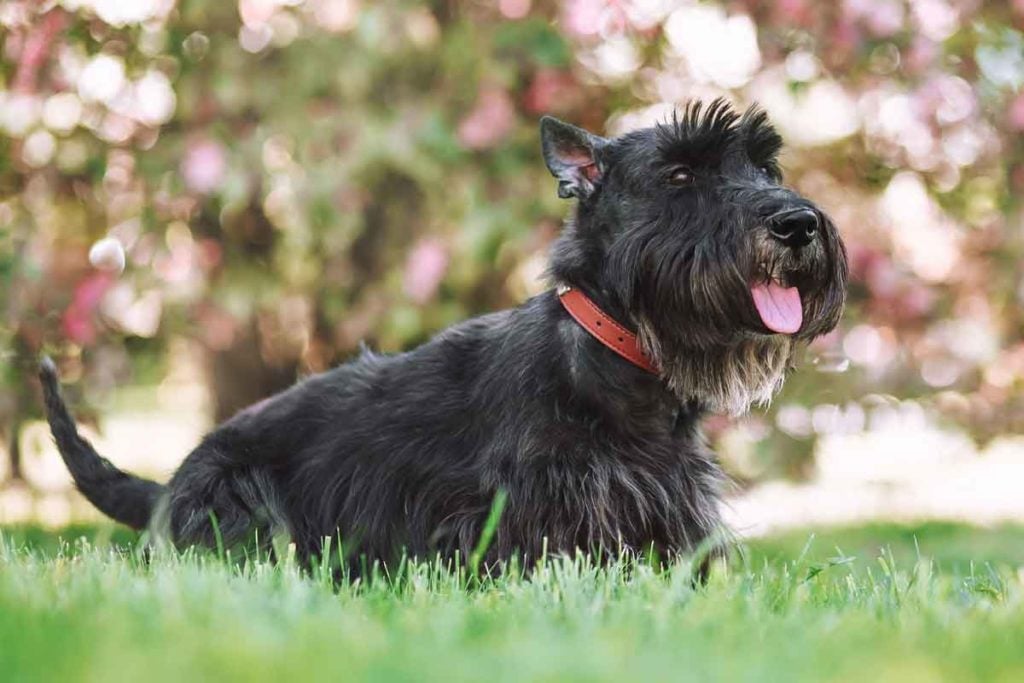 Traditionally bred as rat and other vermin hunters, Scottish Terriers are well known for having a strong prey drive. They are incredibly loyal pups, and love more than anything to be with their people. If you are considering bringing a Scottie into your family, it is important to understand their unique personalities, potential health concerns, and grooming and exercise needs.

Scotties are natural born farm dogs and vermin hunters. They were traditionally trained to hunt rats, foxes, and badgers. This strong prey drive has continued in the breed to today.

The first Scottish Terrier import arrived in the United States in 1883. Two years later, the first Scottie was registered with the American Kennel Club (AKC). The breed rose to peak popularity in the 1930s and early 1940s. Celebrities of the time, such as Humphrey Bogart and Bette Davis, were known to have Scotties. Other famous Scottish Terrier owners include Presidents George W. Bush, Dwight Eisenhower, and Franklin Roosevelt, whose dog, Fala, was beloved in the White House. The breed also has the honor of being turned into a Monopoly game piece and the Harrods department store mascot.

Adult Scottish Terriers are typically about 10 inches tall at their shoulder. Male adult Scotties weigh between 19-22 pounds, while females are usually between 18-21 pounds. This small dog was the perfect size for vermin hunting but is also a great family dog for any living environment, country or city. Scotties are considered large dogs in little packages with big personalities.

Scotties have a distinctive wiry, double coat. Medium in length and most commonly black, Scotties can also be wheaten yellow and various brindle patterns. The harsh, wiry outer layer of their coat covers a dense, soft undercoat. They have a trademark beard and longer hair around their legs and lower body.

These little but substantial dogs have a muscular build and short legs. Scotties are also known for their bright, piercing eyes and erect ears and tail. In fact, their sturdy little tails are thought to have come in handy when owners had to pull their dogs out of holes while chasing prey.

Although Scottish Terriers have a double coat, they do not shed much. They do require regular specialized grooming, however, as their coat grows continuously. AKC notes that the ideal way to groom a Scottie is to have their coat hand-stripped approximately once a month. Owners can also consider clipping their Scottie’s coat about every six to eight weeks.

A weekly brushing and periodic baths will keep a Scottie’s coat tangle-free and their skin healthy. Like most dogs, Scotties’ nails should be trimmed regularly. Ears should also be checked for earwax build-up, and teeth should be brushed to maintain dental and oral health.

Scotties have a moderate amount of energy and require at least one hour of daily exercise to stay healthy and happy. A good long walk or two, plus some playtime, will go a long way for these pups. These hunting dogs love to run and chase, so throwing a ball or toy is an excellent way to expend energy. Because of their strong prey drive, Scotties need a securely fenced space for running off-leash. One glimpse of a critter and these dogs are known to bolt after animals of all sizes.

Activities and toys that appeal to their hunting instincts are a wonderful way to keep Scotties busy. They enjoy chewing, shaking, and hiding items. Tug-of-war can be an endless game for these pups, as their tenacity means they will not back down or let go.

It is important to note that Scotties are not capable swimmers. Heavy and dense, their short legs and disproportionately large head make them unbalanced. They should be kept away from water, or wear a lifejacket if they must be near water, as they can easily drown.

Fortunately, Scottish Terriers are healthy dogs with few serious genetic health issues. However, breeders and owners should be aware of the breed’s predisposition for:

Scotties are known for their strong will and independence. They are not considered happy-go-lucky, get-along-with-anyone, dogs. Scotties have little fear and will not back down from challenges even by much larger, more aggressive animals. While they are not always overly friendly to strangers, these dogs are very loyal and devoted to their family. This means they can be protective and will not thrive when left alone for prolonged periods of time.

Happier with you than alone, Scotties should not be penned up, crated, or on their own all day on a regular basis. Their protectiveness can often lead to barking at anyone or anything they perceive as a threat. This can include the mailman and any passing neighbors and dogs.

While Scottish Terriers can make great family dogs, they do not always respond well to children. They get along best with kids who give them space and appreciate their independent nature.

The Scottish Terrier Club of America warns that these pups can be a challenge to train. Although very intelligent, Scotties are independent thinkers and can be stubborn. They require consistency, boundaries, and patience.

When training a Scottie, using positive reinforcement techniques is essential. They do not respond well to punishment or correction-based training. They may also get bored during extended training sessions. With this, it is best to keep training sessions short, positive, and fun.

Overall, Scotties are wonderful dogs full of can-do attitude and personality but are not suitable for every household.  For the right family, they can be loyal lifelong companions and these dogs engender great devotion from their people.  There are many active Scottie clubs in the world, indicating the popularity of this breed amongst terrier lovers. Keeping in mind your lifestyle and family situation is important before adopting a Scottie but if they do join your household, be ready for a loving and fiercely devoted pet.