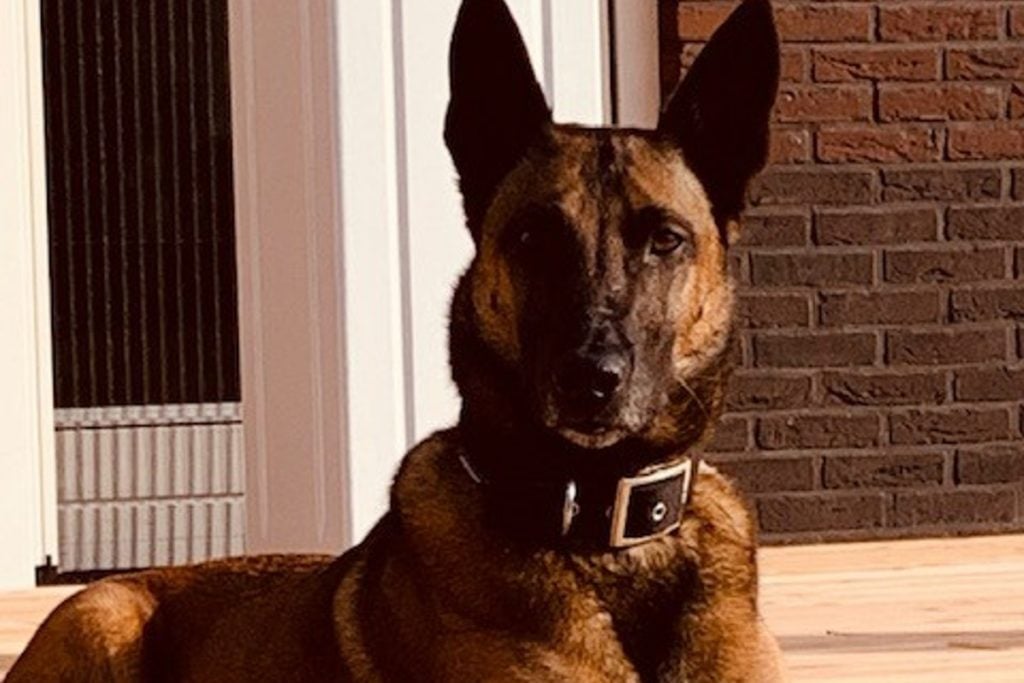 Who is the Belgian Malinois?

With dark ears standing straight up on their head and eyes that seem to always be asking ‘What’s next?”, the Belgian Malinois (mal-un-WAH) is a breed that is ready for any challenge. Similar in looks to the more well-known German Shepherd, the Malinois is a medium to large sized herder with a short coat and a stocky body. Their confidence is shown in their alert expressions and the way they carry themselves, head held high. Given the proper training, stimulation, and companionship they crave, these dogs will go to almost any lengths to be positive working partners with their people.

History of the breed

The Malinois was first bred in the Belgian city of Malines in the early 1800s to be a steadfast and hard-working herding dog. Malinois originated as one of four breeds of herders, sometimes classed as Belgian Sheepdogs. They were brought to the U.S. in the early 1900s and often used to assist military and police work and became a recognized AKC breed in 1959. A focus on performance over the trends of appearance or grooming led to the early development of traits like loyalty and quick learning that have continued in the breed. While the Malinois are still considered excellent farm and ranch hands, most recently, these traits have proved to be invaluable for them as military dogs.

Their desire to work, incredible sense of smell, and ability to learn and implement skills on their own have led the Malinois to excel as bomb-sniffers, police dogs, drug-detection dogs, members of search-and-rescue teams, and guard dogs. They are favored for their speed and can regularly reach speeds of 30 mph. A wide field of vision (up to 270 degrees) allows them to be careful trackers and benefits them in doing surveillance of an area. A well-trained Mal will display a ferocious tenacity to stay with its target and once achieved will not let it go. These qualities have led to them being nicknamed ‘maligators’ or ‘fur missiles’ by their military handlers.

Beginning in the 1900s, the NYPD included Malinois on the police force, and they served in the Army during World War I as messengers and assistants in pulling carts and helping the Red Cross. The Secret Service began using Belgian Malinois as guard dogs at the White House in 1975, and they continue today. These dogs are responsible for screening visitors and protecting the grounds and people at the White House.

In 2014, two Malinois guard dogs, Hurricane and Jordan, were responsible for stopping an intruder who had leapt the fence and was racing toward the White House. Hurricane had to be shown which of the black-clad figures was the intruder and which were other Secret Service agents. Once his handler established the target, Hurricane was unrelenting. Despite being kicked and beaten by the large, more than 200-pound man, Hurricane never showed any signs of tiring or of being in pain until he was called off by his handler and the other agents moved in.

The elite Navy SEALS favor the Malinois as their breed of choice. An eagerness to learn, coupled with physical traits such as a compact, powerful body, have made them excellent military partners. Malinois are carefully trained to complete many tasks including rappelling from helicopters, parachuting out of aircraft, and accompanying amphibious assault teams by Zodiac boat. Their size makes them ideally suited for tandem parachute jumping and rappelling strapped in alongside their human soldiers and has led to them being preferred over larger German Shepherds. The intense and ongoing training military Mals receive assures that they will remain mission-focused, not get distracted, and silently (barking is forbidden) seek out and attain their targets.

Famously, in 2011, as a member of Navy SEAL team 6, Cairo, a six-year-old Malinois who was awaiting his retirement from the force, was called into action on top-secret Operation Neptune Spear with a goal of capturing or killing Osama bin Laden. Cairo landed in Pakistan in his custom Kevlar protective vest and night vision goggles and began his role in the mission. He searched the perimeter of bin Laden’s compound for escape tunnels and hidden explosive devices, making sure the soldiers would have a clear path in. Cairo was hailed as a hero for his quick work and bravery alongside the rest of SEAL team 6 on this successful mission.

The Malinois is a highly active breed. People breeding working dogs tend to favor lines that have no ‘off switch’, and those dogs are happily active and seem to need no rest. Dogs bred more for home companionship still require a lot of exercise and mental stimulation, but they can also be comfortable in a home setting. Belgian Malinois form strong bonds with their people and are happiest when learning or exploring next to them. They are loyal and protective, and they will go to any ends to ensure their pet parents are safe. Careful, positive, early training is essential for the Malinois to limit risks of aggression or anxiety in a dog who is under-exercised or bored.

How to care for your Malinois

Malinois need vigorous exercise every day and certainly benefit from mental stimulation. It is essential that Mals have space to run and an opportunity for multiple exercise sessions each day. Long trail runs, mountain bike rides, or other active pursuits are perfect outings for a Malinois, as they love nothing more than running alongside their favorite people. This is not a breed that can stay in an apartment and make do with a leash walk in the neighborhood twice a day. Because they are quick, inquisitive learners, they can be excellent at dog sports such as agility, dock distance jumping, tracking, or rally obedience.

The Belgian Malinois is a generally healthy breed, and these dogs are not overly prone to specific ailments or diseases. Similar to other larger dog breeds, they might have joint issues such as elbow or hip dysplasia. They also demonstrate a high sensitivity to anesthesia and should be checked carefully by the veterinarian before any surgery or tooth cleaning.

They do not require a lot of grooming. Their short, waterproof coats benefit from occasional brushing, and they will shed twice a year as their new coat grows in. Like all dogs, their nails need to be trimmed regularly.

Often, Mals ‘fail’ out of military or police training for reasons that make them better home companions: they might be too people focused, lack a constant prey drive, or not be willing to chase and attack their target. These dogs occasionally are available for the public to adopt.

Reliable breeders will share the breed lines for available dogs and will be able to convey the traits they are striving for.

Reputable breeders and rescue organizations will conduct health screenings and work to match prospective owners with a dog who will be a good fit for them.

Is a Malinois the right dog for you?

Belgian Malinois are independent and satisfied with their own company, but they do form strong bonds with their families. They can be great companions for active people with a desire to be outside for an hour or two each day.

Because they retain strong herding instincts, Mals have a high prey drive and are attracted to swiftly moving people, animals, and objects. They need careful training around roads and car safety, and they might not be suitable in a home with young children where they might chase and nip.

If you are looking for a companion to sit quietly by while you read on the couch, or one who is happy to be left at home for long stretches of time, the Belgian Malinois might not be the right breed for you. The high demands of ongoing training for the Malinois don’t make them well-suited for inexperienced dog owners, however, those who put in the time and offer the correct support will find themselves with a dog who will return all of these efforts by being a loyal, engaged, and exciting partner.