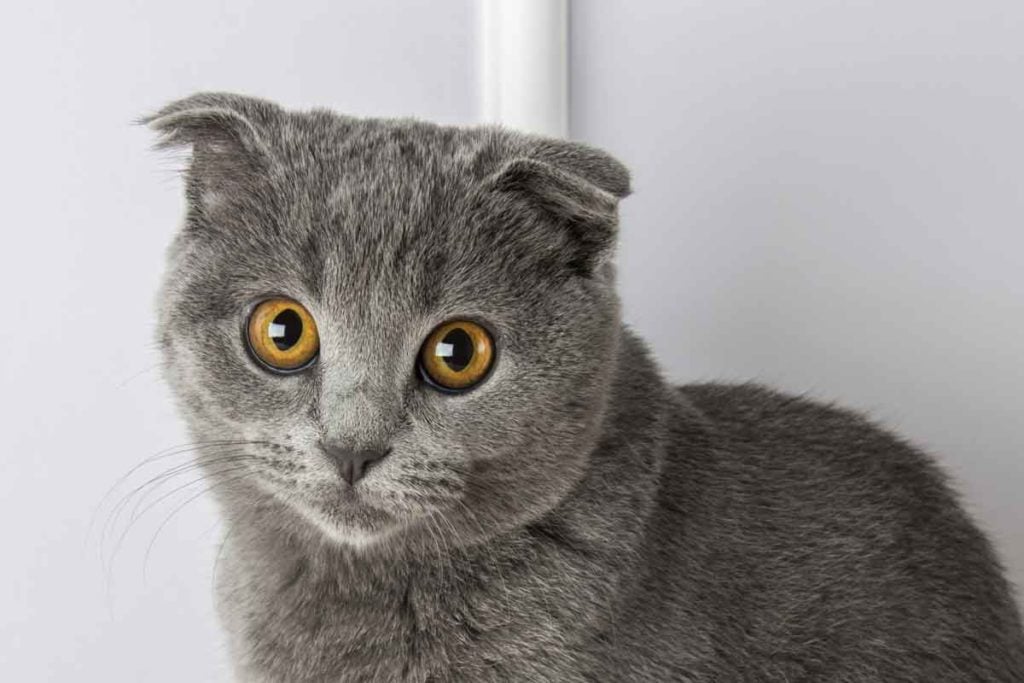 Scottish Fold cats are known for their unmistakable folded ears and round appearance. They are incredibly affectionate and social companions who love to spend time with their families. If you are considering bringing a Scottish Fold into your family, it is important to understand their unique personalities, potential health concerns, and grooming and activity needs.

As their name suggests, Scottish Fold cats hail from the Scottish Highlands. In 1961, Scottish shepherd William Ross stumbled upon a barn kitten named Susie, who had the rare, folded ears that are now characteristic of the breed. According to the Cat Fanciers’ Association (CFA), Ross began to breed Susie with local farm cats and British Shorthair cats. When nearly half of Susie’s kittens developed folded ears, it was discovered that the trait was likely a natural genetic mutation.

Scottish Folds quickly grew in popularity. In 1977, however, breeding of these cats came to an abrupt halt. It was determined that a significant portion of Scottish Folds developed serious cases of osteodystrophy, a condition that causes skeletal development issues, weak bones, and discomfort. Even today, Scottish Folds are not accepted by Great Britain’s Governing Council of the Cat Fancy due to concerns about inhumane breeding practices.

Reputable breeders in the United States have worked hard to eliminate the gene that causes osteodystrophy and Scottish Folds are now considered a generally healthy cat breed. They remain very popular for their cute looks and sweet demeanor. Famous Scottish Folds include Taylor Swift’s Meredith Grey and Olivia Benson, named after fictional characters from popular TV series Grey’s Anatomy and Law and Order.

If there is one thing that Scottish Folds are known for, it is their folded ears. These cats may not be identified immediately, however. The CFA notes that at birth, all Scottish Fold kittens sport straight ears. Ear cartilage starts to bend and fold within a few weeks to a couple months in cats with the gene mutation.

These medium-sized cats have distinct round faces, round eyes, short necks, round whisker pads, and a sturdy body with a bushy tail. Owners and cat fanciers often remark that Scottish Folds look like they are smiling. And between their folded ears and general roundness, they can resemble an owl when sitting up straight, sometimes being referred to as an “owl in a catsuit.”

Scottish Folds can weigh between six and 10 pounds, with larger males weighing up to 13 pounds. They are typically 10 to 12 inches tall and can be up to 30 inches long.

These cats have a dense, resilient coat that comes in both a shorthaired version as well as a less common longhaired version. Scottish Fold coats can come in nearly every color and combination.

The dense coats of Scottish Folds are relatively easy to maintain and do not mat easily as long as you groom them regularly. While these cats shed year-round, grooming can significantly minimize mess around the house. Shorthaired cats require little grooming—just run a steel comb through the coat once or twice a week. Longhaired cats should be groomed three to four times a week to remove dead hairs and prevent mats from forming.

Scottish Folds’ ears should be checked weekly for any signs of irritation, mites, or infection. The fold of the ears can make these cats slightly more prone to ear infections due to decreased airflow.

Like all pets, Scottish Folds also require dental hygiene attention. Brushing their teeth regularly, at least weekly, helps prevent periodontal disease. Their nails should be trimmed every couple of weeks, as well.

Scottish Folds are considered moderately active cats and do not need a lot of active engagement or strenuous exercise to be happy. They will thrive in a household where casual play is balanced with plenty of quiet cuddle time. Provide a cat tree for climbing, perching, and hiding.

As they are very intelligent and love being around their humans, Scottish Folds may enjoy playing with interactive toys like teasers and food puzzles. Both physical and mental stimulation provide great opportunities for these cats to burn energy and bond with their people.

According to the Pet Health Network, the average life expectancy for a Scottish Fold is between 11 and 14 years. These cats are, however, predisposed to some health issues due to genetics.

Scottish Folds are known for being affectionate and social but not demanding, making them wonderful family pets. They love being with their people, and often get along well with children and other pets of all species. In fact, Scottish Folds do not typically enjoy being left home along for long periods of time and may benefit from having other animal companions.

These cats are easy-going and adaptable, easily adjusting to new surroundings and new people. Scottish Folds are sweet-tempered and quite intelligent. They are not especially vocal—their voice is notoriously soft and gentle.

Overall, Scottish Fold cats are wonderful family pets full of love and affection. Owners should understand and monitor for signs of joint discomfort in their Scottish Fold cat, as discomfort can be severe and lead to mobility issues. Scottish Folds are intelligent, easy-going, and great at making friends with everyone.